Today, riding home from work, I nearly got hit.

I was turning left from Drake onto Burrard. Ironically, it was on the separated but in-my-opinion-awkardly-positioned bike lane, which means that it's more like turning left off a one-way street than off a regular two-way street. (Not exactly, but my ungrateful nitpicking about the separated infrastructure will have to be left for another day.) The traffic-light structure is that of a pedestrian/bicycle-activated crossing, so bicycles follow the pedestrian-crossing symbol instead of a green light. (This is a tradition which has always seemed somewhat contradictory to me, in that the powers-that-be seem to be constantly trying to keep bicycles off of sidewalks and associate them instead with motor vehicles. For the love of two wheels, WHICH DO YOU WANT US TO BE?! No wonder everybody's confused.)

Anyhoo... as the light changed and I prepared to cross, I did my instinctual check to my left to see if the cars were stopped and nobody was running the red. Two lanes, both stopped, good. Then, as I started to accelerate, a guy on a bike comes careening past the cars on the inside. Not in a bike lane; there was extra space which I think was from an unfilled parking spot. Based on our relative positioning at the time, I chose to stomp on the pedals to try to accelerate out of his way, loudly yelling "Woah, dude!", and he swerved the other way to avoid me. As he powered on through the red light without a word, I crossly -- and futilely, I expect -- yelled, "Red light!" after him.

So here's why I'm retelling this story.

As a group, we cyclists waste a tonne of breath nagging each other about helmets (in both directions). So my request is this: for anyone who knows any cyclists who routinely make a habit of this unpredictable road vice, can we attempt to expend equal effort to applying peer pressure on such cavalier, rules-don't-apply-to-me behavior? Because this isn't about the safety of one of us; it's about the safety of all of us.

The man in the elevator, eyeing my red bicycle, asked where I had ridden.  "To and from work," I replied. "It's convenient."

"Yes," he agreed, then paused, seeming to search for a word. "And...civilized."

It's not that I haven't been riding. I have. Every day. Everywhere.

It's that my camera is heavy and I haven't been in the mood to carry it everywhere.

However, it is conveniently located in my apartment, so I've started a photo series there.

In addition to gradually incorporating bicycles into my lifestyle over the past two years, I've also started to incorporate fashion. I call myself a "recovering frump". For years, I didn't dress very well. This isn't to say that there was anything wrong with the way I dressed but that it didn't make me feel very good about myself. I made clothing choices based on what I thought I should wear (or what I thought I wanted to wear). Now, I'm working on expressing on the outside a visual representation closer to what I feel like on the inside and dressing in a way that makes me feel great and confidant and ready to face the world every time I walk out the door. 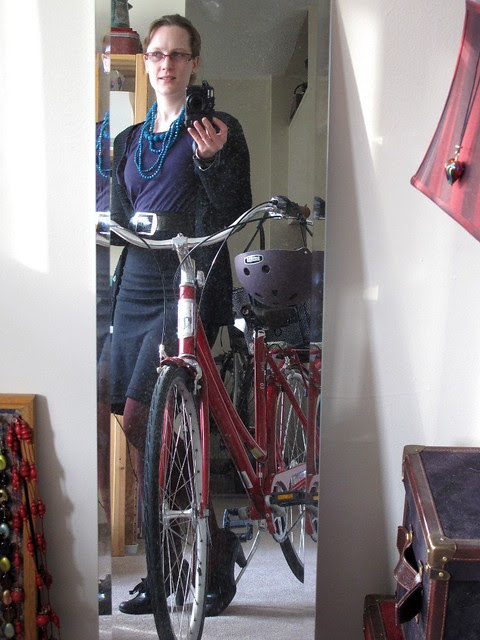 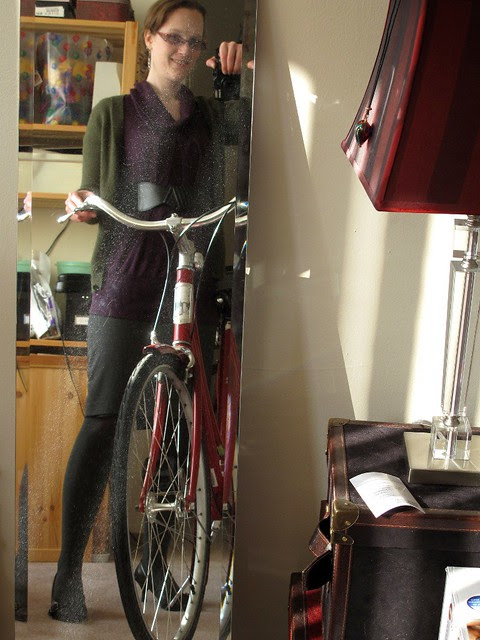 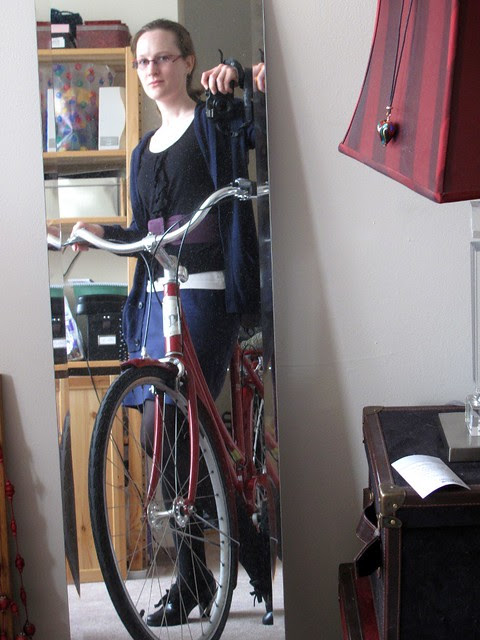 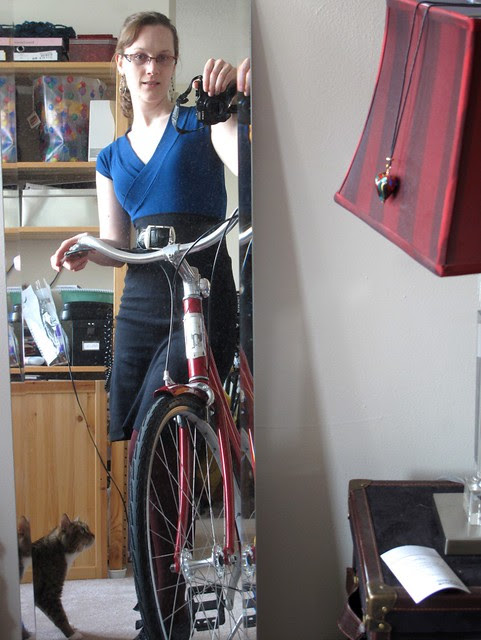 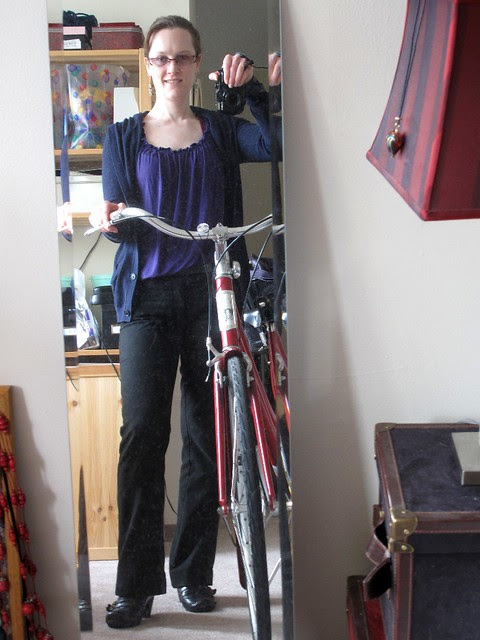 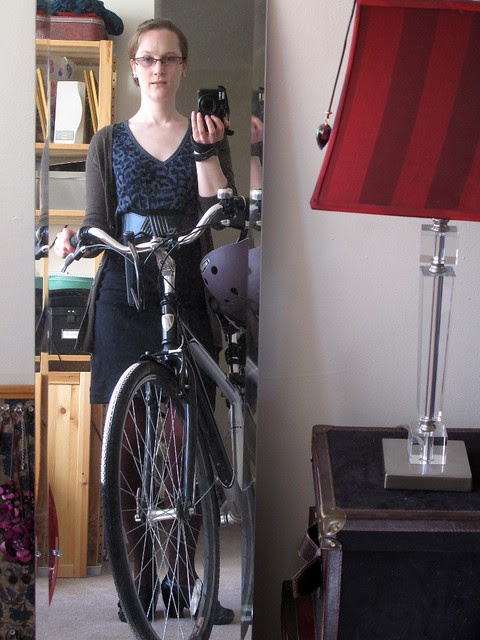 Getting there. Far from the common image given of bicycling where you have to give up your visual identity in order to ride (case in point: the ubiquitous yellow/blue reflective rain jacket)... who knew you could start cycling and actually get more fashionable?
Posted by Mandy at 9:49 PM 2 comments:

For the first time since my family and I started riding bicycles together (again-- as adults), we didn't ride the Galloping Goose. 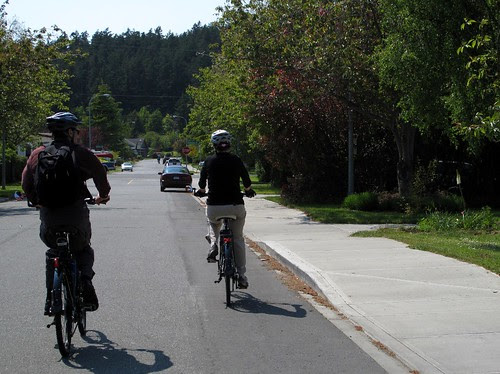 Instead, we took a leisurely roll to UVic, where I spent my post-secondary years before graduating in 2005, and then around calm, suburban, flat, impeccably-paved Gordon Head. (Pothole? What's a "pothole"?) 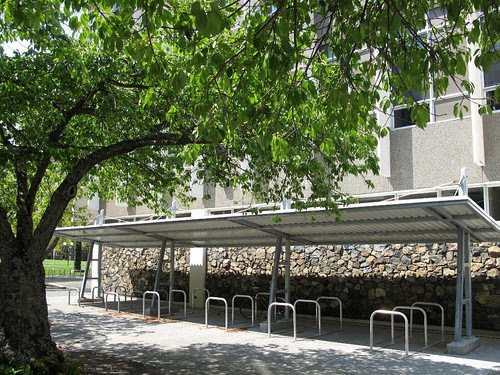 UVic has made some serious bike rack investment since I was there. The "centre" of the University, a fountain/green area in front of the library, is now ringed with racks. And not those out-of-vogue squishy hanging triangle racks that waste space because you can only fit one bike in each "slot" and one misplaced speciman can cut the capacity in half... (deep breath)... but much more spacious models. Some covered. After all, if there's one thing a campus like this has, it's plenty of space. All in all, it was great to travel by bicycle to places that I normally associated with car, bus, or foot travel. I did ride to UVic my first year there, but after one frustrating flat I just... stopped. Lost interest, I think. (My parents house is also at the top of a serious hill. And I mean serious. That might have had something to do with it.) Riding to a familiar place is like recalibrating the distance-memory in my brain; I begin to perceive that place in bicycle-terms instead of by other modes. I believe we all do this as we expand our "I've ridden there" vocabularies/mental maps, destination by destination, neighbourhood by neighbourhood. UVic, Gordon Head: check!
Posted by Mandy at 9:46 PM 3 comments:

kids and cargo on few wheels

I really enjoyed a recent post on Copenhagenize about the variety of "play" cargo trikes for kids, which incorporate either a bucket (for carting your toys, of course!) or an extra seat for your friend.

When I was a kid, my friends and I loved carting each other around in a wooden wagon, as shown here in this photo I've posted before: 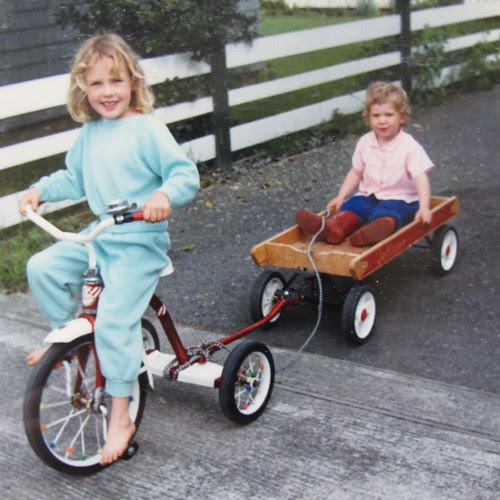 There's something about kids transporting each other on wheels that I really love. I think there's a sense of achievement, competence, and collaboration in it. We're going somewhere together.

I highly recommended taking a look at the post-- it's mostly photos so a quick read but I guarantee you'll see some styles of bike that you've never seen before. Besides, they're mini and have rosy-cheeked little Danish kids on them. What's not to love?
Posted by Mandy at 9:01 PM No comments:

Hm... how to spend Victoria Day? 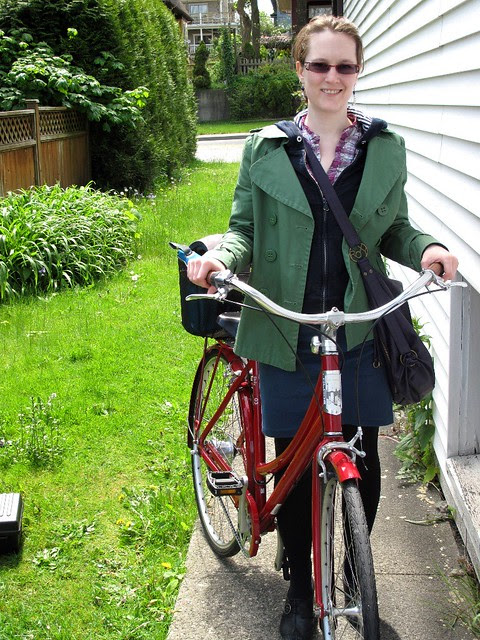 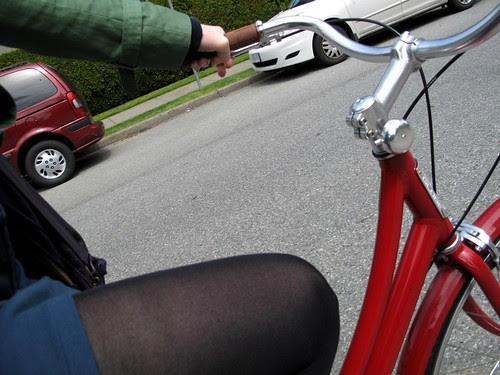 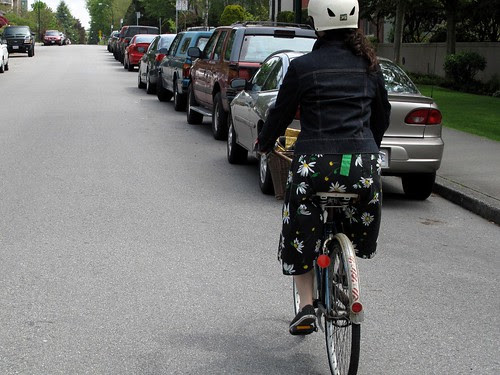 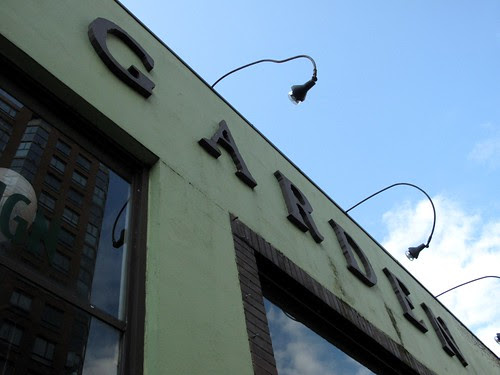 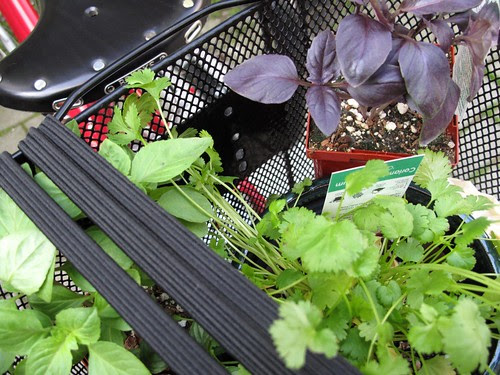 How about brunch, a bike ride, and a trip to the garden store to start a window sill herb garden?

Yep, sounds good to me.

How did you spend your Victoria Day holiday? Did you get out on your bicycle?
Posted by Mandy at 8:13 PM No comments:

I was taking a class with Emily Carr University's Continuing Studies department, recently. (Design for Social Change. Recommended. Check it out.)

Parked out front, one Tuesday evening, was a Retrovelo. 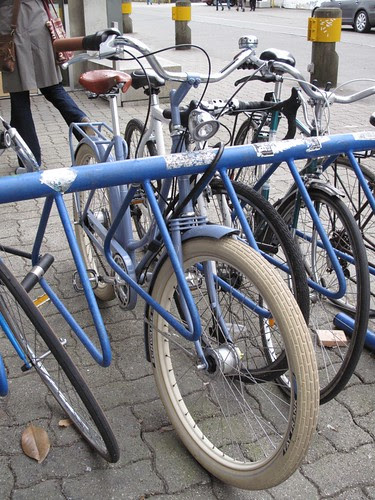 Leave it to an art/design student/teacher to have such a seriously stunning ride. Look at those fat white tires! The painted stem. The 3-tiered front fork. (I suppose there's probably a technical name for that. I just don't know it.) It's a lovely specimen of a bicycle. (And German, I believe.)

As of yet, I don't know of any shop in Vancouver that sells them, so perhaps it came from somewhere else? If anyone reading this knows of any importers in BC, do fill me in.

In other non-photographic news, I spotted:

- A Globe Live 2 Mixte, the other model I was considering before deciding to purchase my Globe Daily 3. There were fabric flowers strung festively around the front rack/basket.

- Abici bicycles (Italian) being sold at Gigi B in the Net Loft on Granville Island. Warning: if you like high-quality, classically-styled bicycles, these will leave you drooling.

And not spotted, but news to report...

- Rain City Bikes is now carrying Linus bicycles. With a variety of frame styles -- mixte, loop, diamond -- and speeds -- single, 3, 5, 8 -- all with internal hubs and many with chain guards and racks, these look like they would make great city bikes. I plan to check them out next time I'm in that neighbourhood.

And that's all for today from the "new practical and beautiful bicycles gracing our city" department.
Posted by Mandy at 10:25 AM 1 comment:

Older Posts Home
Subscribe to: Posts (Atom)
On Few Wheels is about life in the city (Vancouver, Canada) while conciously making use of a variety of transportation options, none of which include owning a car. Walking, public/shared transit, car share, and -- most fun of all -- cycling. In heels.